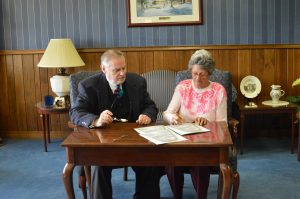 Philippi, W.Va. – Alderson Broaddus University, along with the family and friends of legendary baseball coach Jack Funk, announced that the Jack Funk Memorial Scholarship would be awarded for the first time in the Fall of 2018.

The fund began in 2009 after Funk passed. Jack’s widow, Judi Funk, as well as many family members and friends have contributed to the fund since then to help it reach endowment level and allow it to be awarded.