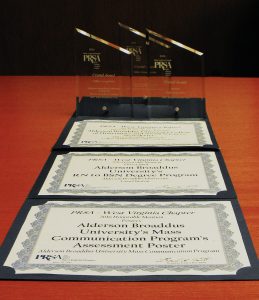 The COMM 220 Media Practicum class brought home the Script Crystal Award for their radio broadcast about the “Philippi Mummies”, a story that chronicled amateur scientist Graham Hamrick’s experiments that culminated in the eventual mummification of two deceased female inmates from the Trans Allegheny Lunatic Asylum in Weston, W.Va.

The class began with collecting research about the two female mummies, selecting sound effects, and formulating questions. Sophomore Malik Washington interviewed museum volunteer Ed Larry and a script was prepared after the interview was recorded. While senior Marcus Hardinger was the story’s reporter, a female voice was needed to read a letter written by a 40-year old woman who would eventually become mummified following her death from natural causes. Since COMM 220 had only male students, Digital Edge president and public relations senior Ciera Nestor lent her talents to the project. In addition, seniors Tyler Hott and Luis Velasco participated on the project.

West Virginia Public Broadcasting aired the story twice on October 28, 2016 at 7:45 AM during “West Virginia Morning” and at 5:45 PM during the evening local news segment. The broadcast occurred over WVPB’s 16 transmitters and translators that cover the entire state as well as portions of Pennsylvania, Maryland, Virginia, Kentucky, and Ohio.

In addition, the production was rebroadcast during the Halloween edition of “Inside Appalachia,” which aired twice on these same stations on Sunday, October 30, 2016. As a syndicated program, “Inside Appalachia” is heard over 15 additional stations in West Virginia, Virginia, Kentucky, and Tennessee. The combined potential audience for the students’ production over all 31 outlets could number more than 50,000 listeners.

The second Crystal Award winner came in the Long Form Video category produced by the COMM 271 Video Production I class.

“I am excited for the students that participated in these award winning projects,” said Dr. James Owston, Dean of the College of Humanities & Social Sciences. “Not only did they receive practical experience, they have the opportunity to use these accolades to build their resumes. It really says something when your work is judged worthy by professionals who currently work in the field.”

Sophomore Lora Owston received an honorable mention for her submission of a card promoting AB’s RN to BSN program. Lora designed the informational card as part of her work study position in AB’s Marketing Department in the spring.

The College of Humanities and Social Sciences received an honorable mention for the College’s 2016 summer newsletter that was produced for the months of June through September.

The Mass Communication program also received an honorable mention for its assessment poster. The poster was used as part of AB’s Annual Assessment Day held on May 19.

“This is the second year that AB has submitted entries, and the competition from the other mass communication and public relations programs in the state is stiff,” Owston said. “Having won a Crystal Award last year and two Crystals and three honorable mentions this year is confirmation that AB is preparing students for a lifetime of achievement.”