As part of an initiative to help curb the national nursing shortage, Alderson Broaddus (AB) and Arellano (AU) universities entered into an international partnership to provide the International Nursing Program (INP). The International Nursing Program was officially launched in 2006 and remains the only Bachelor of Science in nursing academic program in the Philippines, recognized by the Philippine Commission on Higher Education, that allows nursing students the opportunity to complete the last phase of their education in the United States.

“Our missions align in service to God and humanity by providing quality education as we transform students through responsible citizenship in a diverse society, whether at home or in a global community,” said Dr. Propst. “Both institutions are essential in the creation of the intellectual atmosphere, which leads students to be mindful of their obligations to self and others.” 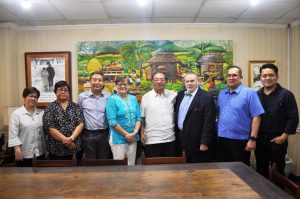 The week-long visit was highlighted by an informational session titled “Nursing Education Beyond Borders: The International Nursing Program Leading to an American Bachelor of Science in Nursing Degree.” The session included a video testimony from a recent International Nursing Program graduate Orestes Estrella, ’13, an inside look at life at Alderson Broaddus, and a proclamation honoring the continued partnership.

Like AB, Arellano University has a rich history in nursing. AU has the oldest and largest baccalaureate nursing program in the Philippines. Through this partnership, students enrolling in the international nursing program will be admitted to AU under AB’s admissions standards and maintain AB’s academic standards in order to remain in the program. Students complete the first three years of their collegiate experience at AU and later transfer and graduate as a member of the AB community.

As part of the strategic partnership, Chairman and Chief Executive Officer of Arellano University Francisco Paulino V. Cayco will travel to AB’s campus and receive an honorary degree at the upcoming commencement ceremonies.

As an institution of learning, Arellano University is guided in all its endeavors by an incessant search for knowledge, a passion for truth and respect for academic freedom. Its primary goal is the development of the youth in a healthy intellectual atmosphere that welcomes discussion and dialogue to the widest latitude governed only by the rights and best interests of the students and the University.

AB stands out as one of the most innovative health education providers in Appalachia, pioneering the nation’s first baccalaureate Physician Assistant program of its kind in 1968, the first post-baccalaureate Physician Assistant Master’s degree program in 1990, and West Virginia’s first four-year Nursing program in 1945. For more information, visit www.ab.edu.