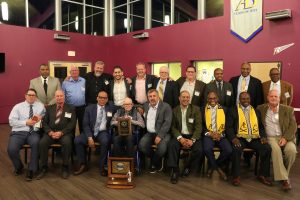 Ben Bolock, a 2006 graduate, was a member of the cross country and track & field teams at AB. He was a member of two different WVIAC Cross Country championship teams in 2001 and 2006. Bolock was the 2001 WVIAC Cross Country Rookie of the Year and earned all-conference runner honors three times. He still holds the AB records in the 5k and 10k races.

A 2000 graduate, Lakisha (Price) Hameed played two seasons for the Battler women’s basketball team. In just two seasons, Hameed reached the 1,000 point plateau with 1,056 total points. She posted a phenomenal senior season leading the WVIAC in scoring with 23.3 points per game. She earned All-WVIAC honors in both seasons at AB and was a member of 98-99 WVIAC All-Tournament Team.

The 1988 men’s soccer team became the first ever team to be enshrined in the Battler Hall of Fame. The 88 team posted a 17-3-2 regular season record and made a run to the NAIA National Championship game, and they finished as runner up. Four Battlers were named to the WVIAC First-Team including conference Player of the Year John Davies. Four players were named to the NAIA All-Tournament Team as well as boasting a pair of third-team All-Americans. Two individual members of the team are already enshrined in the Battler Hall of Fame.