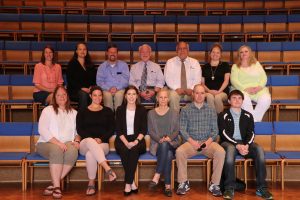 Professor Anderson received two Master of Science degrees in computer science and software engineering from West Virginia University. He resides with his wife and two cats in Bridgeport, West Virginia. After 15 years of building software, Anderson turned his focus to teaching and education and has joined the AB community to prepare students for the future.

Bergeron earned both her Bachelor of Science in biology and her Master of Science in anatomy from Alderson Broaddus University. Bergeron came to Philippi from a small town in Ohio and said her experience as a student at AB inspired her to accept a faculty position.

Dr. Carothers comes to AB from Somerset, Kentucky with more than 27 years of higher education experience. He graduated from the U.S. Naval Academy in 1984, earned his Master of Business Administration degree from Murray State University, and received his Ph.D. from Mississippi State University. Alderson Broaddus University’s welcoming, motivating, and professional atmosphere inspired Dr. Carothers to join the faculty ranks.

Dr. Drew Ciccarello has joined AB as the new dean of the College of Business and assistant professor of business. Dr. Ciccarello is originally from Charleston, West Virginia and earned graduate degrees in both business and education and received his doctorate in leadership/organization development. Ciccarello said he is happy to be part of the AB community and is eager to use his experience to assist in building up the College of Business.

Professor Criss relocated from Chicago, Illinois to Fayette County, West Virginia and earned her undergraduate degree from West Virginia University of Charleston and a Master of Nursing degree from Louisiana State University, New Orleans campus. This year, Criss is celebrating 30 years as a registered nurse. She is eager to bring her love for nursing and teaching to her role at AB.

Dr. Dorsey earned a Bachelor of Science degree from West Liberty University and his Juris Doctor degree from West Virginia University. As a licensed attorney, Dorsey says he has always had his sights on higher education and is thankful for the opportunity to transition into a new career at AB.

Dr. Gray is a West Virginia native coming to AB by way of Riversville. She earned her doctoral degree in education from West Virginia University, a master’s degree in communication studies from the University of Akron, and completed undergraduate work in speech communication, English, and French from Fairmont State College. Dr. Gray credits the culture of community and the commitment to quality education as her motivation for joining the Alderson Broaddus faculty.

Rhoda Leeson is returning to AB as instructor of nursing in the College of Health, Science, Technology, & Mathematics. Leeson graduated from Alderson Broaddus in 1999 with a Bachelor of Science in nursing and has plans toward earning a master’s degree in nursing education. Her career as a registered nurse has focused on patient care and education. Leeson says accepting the faculty position with AB feels like coming home.

Professor O’Connor is a native of Charleston, West Virginia and received his undergraduate and graduate degrees from Marshall University. O’Connor says he chose to join the AB faculty because he believes in the University’s mission to provide high-quality education to best prepare students for success.

Professor Raol is originally from Morgantown, West Virginia and received her undergraduate and master’s degrees from West Virginia University. During her career in education, she has been a substitute teacher, a classroom teacher, an experiential learning educator, and a professional development provider. Raol said she was excited to join AB because she values the opportunity to connect with and motivate students.

Simmons is a native of Elkins, West Virginia. Simmons graduated from Wheeling Jesuit University in 2013 with a Bachelor of Science in nursing and went on to receive a Master of Science degree in nursing in 2016. She hopes to bring her particular interest in holistic medicine and wellness to the classroom.

Dr. Susan Simmons received her undergraduate degrees from Davis & Elkins College and West Virginia University, a master’s degree in nursing from Wheeling Jesuit University, and a doctorate in nursing practice from Walden University. With more than ten years of nursing education experience and 25 years of patient care knowledge, Dr. Simmons is an asset to the program.

AB stands out as one of the most innovative health education providers in Appalachia, pioneering the nation’s first baccalaureate Physician Assistant program of its kind in 1968, the first post-baccalaureate Physician Assistant Master’s degree program in 1990, and West Virginia’s first four-year Nursing program in 1945. For more information, visit www.ab.edu