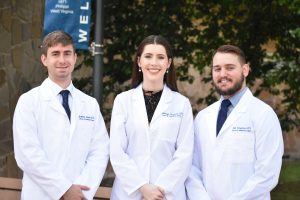 It comes as no surprise that following the 148th Commencement Ceremony, which included the inaugural Master of Science in anatomy graduating class, the Battler community is again celebrating student successes. Three Alderson Broaddus University alumni have, in less than six months, found themselves taking the next steps in their careers.

Just before the start of the 2019-20 academic year, Mackenzie Bergeron `18 from Newcomerstown, Ohio, Seth Bergeron `18 from West Lafayette, Ohio, and Matthew Searls from Saint Albans, W.Va., transitioned from recent graduates to faculty members.

“I decided to become a Battler because AB reminded me of home. The small-town atmosphere was exactly what I was looking for,” said Mackenzie Bergeron. Bergeron attended AB for her undergraduate study and graduated in 2018. She was later accepted into the University’s Masters of Science in anatomy program and earned her graduate degree in 2019. As an assistant professor of biology, Bergeron has begun to share the skills she cultivated during her time as a student in her role as an educator.

In 2015, Matthew Searls earned his undergraduate degree from West Virginia Wesleyan College. Searls began perusing his graduate degree in 2018 and credits the location, class size, and program goals as his reasons for joining the Battler family.  “Since it had been three years since attending undergraduate school, it took a few weeks for my mind to transition back to my role as a student. The opportunities and instructive practices of the anatomy program at AB were a great fit,” said Searls. Searls was offered and accepted the position as an assistant professor of anatomical science at Alderson Broaddus University.

Seth Bergeron received his undergraduate from Alderson Broaddus in 2018 and continued his education by also pursuing his graduate degree at AB. “I became a Battler because of the small, tight-knit community and the opportunities to obtain an excellent education,” said Bergeron. After graduating as one of AB’s first Master of Science in anatomy degree recipients, he accepted a position at West Virginia Wesleyan College as an instructor of biology.

About the Master of Science in Anatomy

The Master of Science in anatomy program is a 24-month on-campus blended program conducted in a traditional face-to-face lecture format, with some online courses offered during the student’s class schedule.

Students in the Master of Science in anatomy program are educated to be anatomists, work in clinical laboratories, teach in community colleges and universities and pursue professional educations in medical or research-related fields.

For more information on the anatomy program, visit ab.edu/apply.