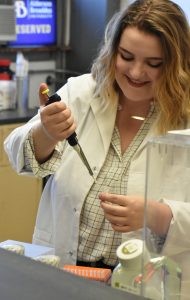 son Broaddus University junior satisfied her curiosity for research by interning through the WV-INBRE program, a federally funded opportunity available to students enrolled at WV-INBRE partner institutions interested in biomedical research with an emphasis on chronic diseases.

Emily Rainey, a dual biology and chemistry major from Beckley, West Virginia, executed her research at the Robert C. Byrd Health Sciences Center of West Virginia University. Her project was completed under the guidance of Stanley Hileman, professor of physiology and pharmacology.

“One of the biggest things I wanted going into this was to really see what it’s like to do research,” Rainey said. “I didn’t know if I wanted to eventually do an MD or an MDPHD program, so I wanted to see what it was like.”

Rainey’s project studied the communication between NKB neurons, which deal with reproduction and puberty, and POMC neurons, which regulate nutrition, in order to better understand the onset of puberty in women. Tissue was taken from the hypothalamus of ewes to determine whether NK3R, a receptor of NKB, existed within POMC neurons. They then examined how estrogen and age influenced NK3R expression within these neurons.

“Women, especially in developed countries, are experiencing puberty onset at much younger ages,” Rainey said. “That has a lot of negative effects, but if we can understand why that’s happening and what’s affecting it, we can start to counteract negative things that happen when puberty onset is altered.”

Some of the adverse outcomes related to early puberty onset include obesity, osteoporosis, and eating disorders. Working on this research held personal significance for Rainey, as one of her primary goals is to help empower young women. However, Rainey explains that early puberty does not affect everyone negatively. In the agricultural world, this can produce the opposite effect.

“The earlier you can get ewes, lamb, and cattle at the age of maturity, the greater their lifetime productivity,” Rainey said.

Rainey showcased her research findings at the 2018 WV-INBRE Summer Research Symposium and recently at the Undergraduate Research Day at the State Capitol. She hopes to pursue additional research in the future, and has been invited back to Hileman’s lab to work on similar projects.

“I honestly enjoyed every second of it,” Rainey said. “The first-hand experience with research was incredible, but it’s also just amazing to have your own research that no one has ever done before.”

Photo Caption: Rainey studies the communication between NKB neurons, which deal with reproduction and puberty, and POMC neurons, which regulate nutrition, in order to better understand the onset of puberty in women.

The University has relaxed its COVID-19 mask mandates for both vaccinated and unvaccinated individuals with a few exceptions.

The University may, at its discretion, reinstate masking protocols if or when conditions related to COVID-19 change.

This decision is based on declining infections and the relaxation of safety protocols nationwide. The University recommends vaccination, including booster shots, as the best defense against COVID-19.

If you have not been vaccinated, please consider protecting yourself and others by getting your shot.  Please visit our COVID page for up-to-date masking exceptions and local information.