Alderson Broaddus University associate professor of English, Dr. Charlie Starr, upholds AB’s standard of faculty excellence with the publication of an essay co-authored about the lost sequel to the C.S. Lewis novel, The Screwtape Letters.

Having already published three never-before-seen Lewis manuscripts, Dr. Starr has positioned himself as a C.S. Lewis scholar and the world’s leading expert on Lewis’s handwriting. Along with a poem titled “Philo and Miso,” the essay, “Archangel Fragment and C.S. Lewis’s World-Building Project,” was published in the latest issue of Sehnsucht: The C.S. Lewis Journal.

“The ‘Archangel Fragment’ is one more piece of a larger project,” said Starr. “Lewis has a way of saying things, and afterward, you never think the same way about him. There is always something new. I want everyone to have a chance to read everything.”

When Starr was studying for his undergraduate degree, his love for all things Lewis began with the book, Mere Christianity. The following summer was filled by reading all seven fantasy novels of The Chronicles of Narnia series, and he was hooked. Starr later graduated with a master’s in humanities from the University of Dallas and earned a doctorate in English with education emphasis from Middle Tennessee State University. 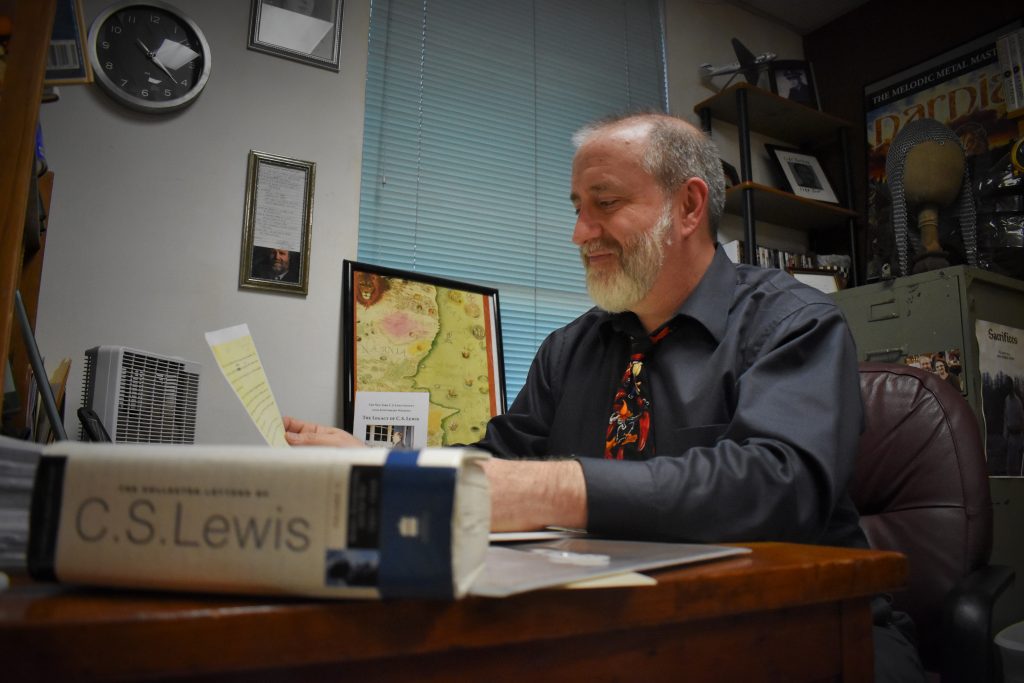 The publication also featured a review by Starr of the book, Mythopoeic Narnia: Memory, Metaphor, and Metamorphoses in the Chronicles of Narnia and a review of Starr’s most recent Lewis book, The Faun’s Bookshelf: C.S. Lewis on Why Myth Matters. Over his 30 years of teaching experience, Starr has published numerous scholarly essays, more than a hundred popular articles, a dozen chapters for book anthologies, and seven books.

“I got to fall in love with C.S. Lewis, and then, I got to work with original manuscripts,” explained Starr. “Discovering unpublished work is like being a literary archeologist solving a mystery.”

Since the Sehnsucht publication, “The Faun’s Bookshelf” has been reviewed by Carla Galdo of Kent State University Press in a recent publication of FORMA. The FORMA Journal publishes essays, reviews, interviews, and poetry. Additionally, Starr participated in a podcast focusing on the 70th anniversary of “The Lion, the Witch, and the Wardrobe,” which aired on April 11.

Sehnsucht: The C. S. Lewis Journal is the only peer-reviewed journal devoted to the study of C. S. Lewis and his writings published anywhere in the world. The journal includes articles, review essays, book reviews, film reviews and play reviews, bibliographical material, poetry, interviews, editorials, and announcements of Lewis-related conferences, events, and publications.