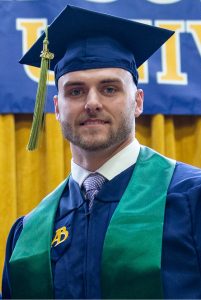 Since high school, 23-year-old Tuckahoe, New Jersey native and Alderson Broaddus University alumnus William Bailey has had a strong love for strength and conditioning, and that love and passion has earned him prospects on collegiate and professional levels.

“I first become involved with strength and conditioning in high school. As an athlete, most of your time is spent in the weight room; I began to develop a passion for it,” said Bailey. “I was raised in a family of athletes, and my father and mother always encouraged me to participate.”

Bailey’s family opened Crossfit609 in Ocean View, New Jersey, in 2015, and Bailey found himself gaining hands-on experience as a Crossfit coach. As a recent high school graduate, his focus was on the pursuit of a degree and a passion for making a difference in the gym and on the field.

Bailey inked his commitment to Alderson Broaddus University’s football team in 2015 with aspirations of furthering his love for the field of strength and conditioning by pursuing a degree in exercise science and playing a collegiate sport.

“When deciding on where to further my education, Alderson Broaddus was the only university that offered the classes I was looking for and the promise of a more intensive and hands-on program,” said Bailey. “Although there was not a specific major for strength and conditioning, my professors helped me structure classes that spoke to what I was working to achieve.”

During his junior year, Bailey was able to complete an internship at Gorilla Strength & Fitness in Nutter Fort and said his professors were instrumental in this and his later achievements.  “My professors took an interest in me and were able to connect me with people that helped me grow as a coach and propel me to the next level,” said Bailey.

Upon graduating in May 2019, Bailey began to seek out opportunities to advance his career outside of the classroom, and before he knew it, he was out on the field as an intern with professional NFL team the New York Jets.

“The field of strength and conditioning is largely about the ability to build connections with the people you meet. I built a connection with my high school head coach; he, in turn, helped me secure a position with the Jets. I built connections with my professors, coaches, and fellow athletes who helped prepare me for what it takes to be a collegiate strength coach,” said Bailey.

Bailey completed his internship with the Jets and went on to accept a position as an intern with East Tennessee State University under the tutelage of Football Strength and Conditioning Coach Allan Johnson. Bailey’s ETSU internship finished in December, and he is now participating in a year-long internship with Ohio State University’s Strength & Conditioning team. Bailey says he plans to learn what he can from renowned coaches and become a strength and conditioning coach at either the collegiate or professional level.