Alderson Broaddus University’s mass communication department dominated both the regional and state PR competitions in 2019. In total, AB’s faculty and students earned 39 PR awards during the year – winning 36% of the regional awards and 32% of the state awards – more than any other organization.

This latest honor follows Owston & Owston’s winning 2018’s “Best in West Virginia” award in Morgantown in June 2019 during the West Virginia PRSA chapter’s annual Crystal Awards Gala. In addition, the campaign won eight Diamond and four Merit awards at the regional level and 11 Crystal awards and one Honorable Mention at the state level – a total of 26 honors. 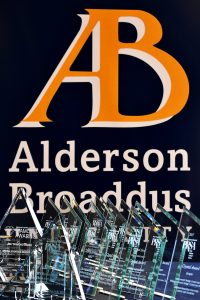 Being inspired by other PR campaigns in the state, Dr. Owston, in his role as a mass communication professor, thought that it might be a good project on which to collaborate with his daughter Lora, then an Alderson Broaddus junior mass communication and journalism major. “We hoped that we might be able to submit our work for consideration,” said Owston. “We never expected that we would have the highest score in the state, let alone in the region.”

The Owstons aided the 2018 Holocaust commemoration by providing a 1996 video interview of the late Max Lewin, Beckley’s only Holocaust survivor. Dr. Owston recorded the video, but it was never published due to Mr. Lewin’s wishes that it would not be shown during his lifetime. Lewin died in 2002. In total, the campaign included the following elements: branding, logo, blog, posters, radio PSAs, a feature radio story, videos, a press release, a newspaper article, radio interview, website, social media, newspaper ads and other media coverage. The WV Remembers campaign was active between February and April 2018.

In both competitions, Alderson Broaddus competed against hundreds of other entries. Since 2016, AB’s mass communication students and faculty have won 51 state and regional public relations awards. The most recent regional awards will be presented in June at the West Virginia chapter’s gala.

Previous regional “Best in Show” winners were Gatesman, Inc., of Pittsburgh (2018), TriComB2B of Dayton (2017), Bose Public Affairs Group of Indianapolis (2016) and the Indiana Department of Revenue (2015). The West Virginia Department of Commerce in 2011 was the most recent state entry to achieve the regional “Best in Show” award. “Best in West Virginia” winners from the recent past include Charles Ryan and Associates (2018), Fahlgren Mortine (2015 & 2017) and West Virginia University (2016).