Philippi, W.Va. – Alderson Broaddus University announced the Reverend James O’Connor as the speaker for the 2018 Baccalaureate Celebration on April 26, 2018 at 11 a.m. in Wilcox Chapel. 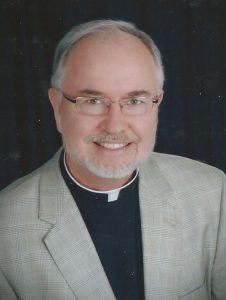 Rev. James E. O’Connor, also known as Father Jim, is a brother of the Sacred Heart Province of the Third Order Regular of St. Francis of Assisi. He is a graduate of West Virginia University with a Bachelor of Arts in Philosophy, and of St. Michael’s College of the Toronto School of Theology of the University of Toronto, Ontario, Canada, with a Master of Divinity.

After ordination to the Roman Catholic priesthood, Father Jim ministered as an associate pastor in Pittsburgh, Pennsylvania. From there he became the pastor of the Marshall Catholic Community, overseeing the operation of the Catholic Newman Center at Marshall University, Huntington, West Virginia. He was the pastor of several parishes before beginning his present assignment as the Pastor of St. Augustine Church, Grafton, and St. Elizabeth Parish and Newman Center, Philippi, West Virginia.

As a musician/Christian songwriter/vocalist, Father Jim has traveled with his “Rejoicing in the Spirit” trio to more than a hundred United States Catholic churches. In 2000, he was invited to perform and give a musical presentation directing the combined choirs from the United States and Figi battalions of the Multi-National Peacekeeping Forces based in Egypt. In 2007, he was invited to give a musical presentation to United States troops stationed in Seoul, South Korea.