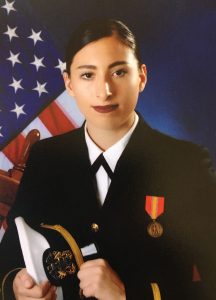 Jayme Ann Hykes, a 2014 graduate of Indian Valley High School, recently graduated with honors from Alderson Broaddus University with a Bachelor of Science in nursing.

In her junior year at AB, Hykes applied for and received one of the prestigious Naval Nursing Academy awards, given to only 30 students across the United States. The award was given as a result of her personal letter to the Navy, faculty recommendations, and her strong academic record. This award also included stipends for the completion of her degree and was the first such award given in the long history of Alderson Broaddus University’s nursing program.

In July, Hykes passed her state boards, and in a ceremony held in Wheeling, W.Va., she received her commission as an ensign in the U.S. Navy.

As part of her Naval requirements, she attended a five-week Officer Development School in Newport, R.I., and graduated on Oct. 18. At the close of the school, she was one of three officers who had speaking presentations at the official buffet ceremony for 300 family members and guests of the 85 graduates.

Hykes is stationed at the Naval hospital in Jacksonville, Fla., where she reported on Oct. 22. Her deployment will be for four years with many options available to her which will provide further growth and development opportunities.