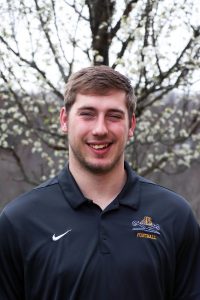 Forty-five minutes from Brendan Wilson’s hometown, the Toledo water crisis of 2014 still affects the residents of Wauseon, Ohio. Wilson enrolled at Alderson Broaddus University to further his education and play football, and to hopefully take home a remedy to the problem plaguing the Lake Erie area: a toxic algae bloom wreaking havoc on water quality for residents and wildlife.

In preparation for his senior research project, Wilson is investigating how nutrient concentration of phosphorus, nitrogen, and the concentration of suspended solids are impacted by grass filter strips in the Lake Erie Basin.

“The title of my research is The Efficacy of Nutrient Filtration in Water by Grass Filter Strips,” explains Wilson. “Currently in Lake Erie, algae blooms, caused by an excess of nutrients in the water, are deteriorating the quality of the water and are forming dead zones. Those same algae have affected the quality of the water for the city of Toledo and have caused the city to shut the water off due to the danger of the quality.”

Wilson went on to explain the direct impact this type of pollution had on his own family, stating that his grandmother lived in Toledo where bottled water had to be hauled to her home. The algae bloom left residents with contaminated water that wasn’t safe for drinking or bathing. The freshwater wildlife could not even survive the bloom. Seeing this firsthand, Wilson understood the problem and was determined to get his hands dirty to find a solution.

The idea of the grass filter came from his recent internship last summer with the USDA in Fulton County, Ohio, just a few minutes from his home. During his placement, grass filter strips were being used to guard against soil erosion, trapping runoff containing sediment, pesticides, and other pollutants.

“The concept behind the filter strips is the same concept of a riparian buffer where shrubs, trees, and grass filter water naturally so that when it hits the watershed, the water is the quality it should be,” said Wilson. “Where I live in Ohio, there’s a big issue of runoff from commercial and agricultural sources. It’s appealing to see the concept of grass to help filter water. Many times, grass is used to hinder soil erosion, but I want to look at it to see if it can act as a riparian buffer to absorb some of the nutrients so that the toxins aren’t hitting lake Erie, causing more and more algae blooms.”

Professors at AB encouraged Wilson to apply for the internship to help him hone his interests and prepare for concentrated studies in a master’s program. He called the Fulton County Soil and Water Conservation District office and inquired about any possible opportunities. He landed an intern spot in the EQIP program, part of the USDA’s Natural Resources Conservation Service program. The Environmental Quality Incentives Program (EQIP) helps agricultural producers confront their unique set of challenges while conserving natural resources like soil, water, and air. This program invests in solutions that conserve natural resources for the future while also improving agricultural operations.

“I’ve grown up around farmlands and love being outside,” said Wilson. “It’s the reason I chose to study environmental science at Alderson Broaddus University, and in doing so, I see all the diversity and opportunities in this field.”

While his hometown environment helped shape his interest in environmental science, Wilson admits that his parents were a huge influence as well. “My dad is a pharmaceutical chemist, and my mom taught math for years. Math and science came to me naturally; it runs in the family.”

“I like to play in the dirt. I like being outside and solving problems. Preparing for this research project has given me the opportunity to have my foot in both worlds: solving the problem by using the nature that is already there.”

Wilson plans to conduct his research over two summers and then present his project in his senior year. His goal is to gain another internship with the USDA this summer.