Alderson Broaddus University senior and WV-INBRE student, Emily Rainey, was among one of ten students in the nation selected to represent the EPSCoR/IDeA Foundation (EIF) on Capitol Hill in May 2019.

Sponsored by the National Association of Idea Principal Investigators (NAIPI), Van Scoyoc Associates (VSA), and EIF, Emily Rainey traveled to Washington, D.C., to advocate for continued biomedical research funding through the INBRE and IDeA programs. Rainey shared her experience with the WV-INBRE program and the impact biomedical research can have on states like her home state of West Virginia. 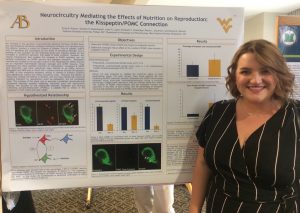 In her research titled The Influence of Estrogen and Age on NK3R Expression in POMC Neurons, Rainey took a closer look at how the brain controls the timing of puberty onset and its regulation by nutrition. Rainey’s project studied the communication between NKB neurons, which deal with reproduction and puberty, and POMC neurons, which regulate nutrition, in order to better understand the onset of puberty in women. Early puberty onset is associated with several adverse health effects such as obesity, metabolic syndrome, psychosocial distress, and eating disorders.

“I aimed to help contribute to the knowledge base, and the research that I was able to conduct has so many implications for the health of our communities and economic growth,” explained Rainey. “Not surprisingly, my research indicated that women are experiencing puberty onset at much younger ages. If we can understand why that is happening and what is affecting it, we can start to address the negative effects.”

As a participant, Rainey was in a unique position to present her findings to a national audience. Rainey expressed the importance her research can have in a state where public health is impacted by adverse health effects, like West Virginia. She was able advocate for underfunded states in the way of biomedical research by meeting with key staffers from the congressional offices of senators Shelly Moore Capito (W.Va.), Joe Manchin (W.Va.), John Kennedy (La.), Bill Cassidy (La.), Tim Scott (S.C.), and Lindsay Graham (S.C.).

Rainey’s project was completed under the guidance of Stanley Hileman, professor of physiology and pharmacology, an opportunity she may not have achieved without the support of IDeA and INBRE. “The INBRE program allowed me to conduct and present my research in an academic setting I would not have otherwise had access to,” said Rainey. “I am incredibly grateful to Dr. Stan Hileman and WV-INBRE for the opportunity to represent my home state and to network with other experts and students from a variety of fields.”

WV-INBRE, short for West Virginia IDeA Network of Biomedical Research Excellence, is a federally funded program that provides opportunities for biomedical research with an emphasis on chronic diseases. The program consists of a consortium between Marshall University, West Virginia University, and an additional 14 partner institutions.