Alderson Broaddus University welcomed hundreds of guests to campus over the Homecoming weekend on Oct. 9-13. The annual celebration hosted a variety of events that featured renowned alumni and honored friends of Alderson Broaddus. 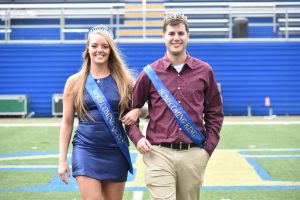 The crowning of Homecoming King and Queen kicked-off the festivities, with students Alex Buckheit and Alex Shaffer named respectively. Buckheit is a senior double majoring in business administration and accounting from Baltimore, Maryland, representing the Phi Beta Lambda student business organization and the Epsilon Tau Eta Sigma fraternity. Shaffer is a senior triple majoring in exercise science, psychology, and religion and philosophy from Morgantown representing Baptist Christian Ministries and the Gay-Straight Alliance.

“Homecoming is a special time that allows us to come back home to the mountaintop and reminisce with old friends and make new memories,” President Tim Barry said. “Our Battlers are living embodiments of this wonderful place.”

During AB’s annual Alumni Awards Banquet, the University paid tribute to the success of its graduates by bestowing honors to seven deserving alumni.

Gary K. Washington, a 1979 graduate and native Washingtonian, was honored with the Alumni Achievement Award for outstanding contributions in his chosen field. Washington earned a Bachelor of Arts degree from Alderson Broaddus University and obtained his Master of Education degree in administration and supervision from the University of the District of Columbia. Washington, who was an educator and a member of the Washington, D.C. Board of Education, spent his 30-year career as a high school and middle school principal working to develop efforts to improve numerous chronically failing schools. He received numerous awards for educational leadership, including the Rubenstein Award for Outstanding Leadership, National Association of Secondary School Principals’ Principal of the Year, Virginia Commonwealth Leadership Award, and a letter of commendation from First Lady Laura Bush for outstanding leadership at Backus Middle School following 9/11.

The Distinguished Alumni Award, representing outstanding service to the University, was presented to 1980 graduate Dr. Cynthia D. Sofhauser. Sofhauser obtained her bachelor’s degree in nursing from Alderson Broaddus University and holds certification in advanced holistic nursing and nursing education. She earned her master’s degree in adult health nursing from the University of Pennsylvania, where she was prepared as a cardiovascular clinical nurse specialist, and received her Ph.D. in nursing from the University of Texas. Sofhauser is a professor of nursing at Indiana University South Bend School of Nursing, Vera Z. Dwyer College of Health Sciences, where she teaches both undergraduate and graduate nursing students. As a member of the Indiana University Faculty Academy on Excellence in Teaching, she has received numerous awards for her scholarly efforts.

Dr. Alvita K. Nathaniel was honored with the Nursing Alumni Association Award. This award recognizes achievement and leadership in the nursing profession. Nathaniel graduated from Alderson Broaddus University in 1972 and went on to receive her master’s, doctorate, and Ph.D. in nursing from West Virginia University. She began her nursing career at the Charleston Area Medical Center as an in-service instructor and staff nurse. Nathaniel is now professor emerita at West Virginia University School of Nursing, where she teaches bachelor, master, and doctoral level courses. She is widely known for her contributions to the field of nursing grounded theory and public policy.

The Outstanding Young Alumni Award, which recognizes an individual for exceptional achievement in their field within ten years of graduation, was presented to 2007 graduate Adam L. Cheeseman. Cheeseman received his degree in secondary education from Alderson Broaddus and holds a master’s in biblical studies from Liberty University and a Superintendent’s Certification from Salem International University. He now serves as Superintendent of Doddridge County Schools and is currently pursuing his doctorate in strategic leadership at Liberty University. Cheeseman’s leadership style is focused on meeting the needs of the holistic child to prepare students who not only are college or career prepared but also prepared for life after high school. During his tenure as Superintendent, graduation rates have increased, and district statewide academic achievement has improved.

Each year, a Lord and Lady are selected to preside over the Homecoming Festivities. The distinction was awarded to Dr. Scott and M. Jane Kavanagh, a couple who differentiated themselves through their service, dedication, and gifts to AB. Scott graduated from AB in 1969 with a bachelor’s degree in sociology and earned his doctorate from the Graduate Theological Foundation. M. Jane graduated in 1969 with a bachelor’s in psychology and obtained dual certification in early childhood and elementary education. Since retirement, she has volunteered as a tutor with Literacy Volunteers of Greater Syracuse and now mentors at the University of New England. 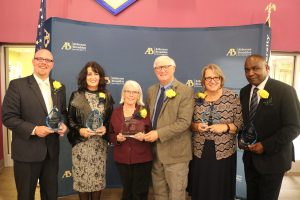 “AB has amazing alumni, and this year we were so blessed to have so many distinguished alumni return to the mountaintop and help us celebrate one another’s lifelong achievements,” President Barry said.

This year’s Homecoming represented milestones for several groups. AB’s Class of 1969 celebrated its 50th-year reunion and induction into the E.J. Willis Society.