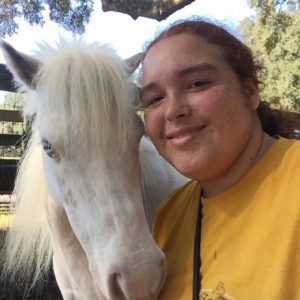 “I gained an interest in miniature horses at a young age,” explained Danielle Cerna, an exercise science student at Alderson Broaddus University. Originally from Long Island, New York, Cerna and her family relocated to Summerfield, Florida, when she was just five years old. “My parents never imagined my sisters and I would ever be interested in horses.”

Cerna’s journey with horses wasn’t always a joyful one. At the age of eight, Cerna was involved in a riding accident and had grown a fear of horses and of riding, a hobby that was very close to her heart. To help her overcome her fear, local farm attendants reached out and offered Cerna the opportunity to participate in driving lessons if she agreed to begin riding again. “Despite my fear, I took the opportunity. I still had a fear of riding, but learning to drive miniature horses started my healing process and grew into something I never expected.”

After a few years of driving lessons and slowly reintroducing herself to riding, Cerna’s parents offered to help her adopt a horse of her very own. In December 2011, an 11-year-old Cerna met seven-month-old, blue-eyed, tovero miniature horse, Sugarfoot, and never looked back. For nearly nine years, Cerna has been teaching Sugarfoot to drive, perform tricks, and, with the knowledge she is gaining in the classroom, how to be a therapy horse. 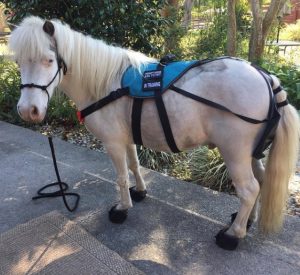 Cerna initially came to Alderson Broaddus to pursue a degree in biology with hopes of becoming an equine veterinarian and quickly found that studying exercise science with a concentration in occupational therapy could help her follow her dream for Sugarfoot. “I was fortunate to learn that I could use what I was studying in the classroom to better train Sugarfoot,” said Cerna. “Up to this point, I was training Sugarfoot with informational videos, but I now had something more substantial to apply to the work we were already doing together.”

Shortly after changing her major and increasing her knowledge base, Cerna connected with Honey’s Mini Therapy Adventures in Webster, Florida. “Near the end of 2019 and the beginning of 2020, I started traveling to various facilities with Honey’s and observed therapy sessions and the different elements of visiting patients,” Cerna explained. Things happened very quickly for Cerna and Sugarfoot after connecting with Honey. In June 2020, after months of intensive training, she and Sugarfoot were officially registered as a therapy team with the American Miniature Therapy Horse Association.

Upon returning to Alderson Broaddus for the 2020-21 academic year, Cerna’s family suggested adding a new friend and future therapy horse to the team. She will carry her success with Sugarfoot into her training with Stormy Tango, affectionately known as Tango. Cerna will be documenting Tango’s training progress on her YouTube channel “Horse Training with Miniatures.”

Alderson Broaddus University is an independent institution of higher learning, committed to serving the region as an academic, cultural, and religious resource, with programs based on a liberal arts foundation.

Since its founding in 1871, AB has been a leader and innovator in higher education, with accolades in the health and natural sciences. Alderson Broaddus University stands out as one of the most innovative health education providers in Appalachia, pioneering the nation’s first baccalaureate physician assistant program of its kind in 1968, a post-baccalaureate physician assistant master’s degree program in 1993, and West Virginia’s first baccalaureate nursing program in 1945.

AB is located on a historic hilltop in Barbour County in Philippi, West Virginia. The University is rooted in historic and continuing relationships with the American Baptist Churches in the U.S.A. and the West Virginia Baptist Convention.