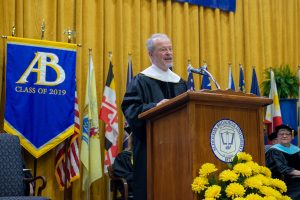 Of those graduating, 159 earned their undergraduate degrees, six earned their associate degrees, and three earned their master’s degrees in anatomy. The Class of 2019 is a generation prepared to serve out the AB mission as well-rounded, responsible citizens contributing greatly to society. Among these seniors are graduates from a variety of disciplines, representing 12 countries and 21 states, who have participated in 9,753 hours of community service in the 2018-2019 academic year.

Lapchick opened by reciting the mission of Alderson Broaddus University: “to provide students with the highest quality education, striving to prepare students to succeed in their chosen disciplines and to fulfill their roles in a diverse society as well-rounded and responsible citizens.”

He explained how important that mission is to society as a whole. “I speak to many sport audiences, but never to a student body of 70% student-athletes,” said Lapchick. “As Battlers, you come prepared to crush defeat and take on new challenges. As you leave here today, there’s a lot of challenges facing us in society today.”

He spoke of his own trials growing up, listening to and witnessing racial bigotry and inequality. His father, Joe Lapchick, was an iconic figure who broke the color barrier in 1950 by signing Nathaniel “Sweetwater” Clifton—the first African American NBA player—to the New York Knicks. Lapchick saw his father become a change agent which significantly impacted him; he vowed never to let race get in the way of doing the right thing.

In 1961, Lapchick spoke out against those who were hurling racial epithets toward a young African American man on the basketball court. Lapchick was beaten for defending the man who would eventually become known as Kareem Abdul-Jabbar.

Lapchick led the American sports boycott of South Africa from 1975 until the end of Apartheid. During this boycott, Lapchick was brutally assaulted in his office. As he spent the night in the hospital recovering from liver and kidney damage, a hernia, a concussion, and wounds from a racial slur that was carved into his stomach with scissors, he vowed to dedicate his life to bring about positive social change.

He went on to explain that social injustices and inequalities are higher now more than ever.

“In the U.S., white women earn 78 cents on the dollar compared to white men in the same job. African Americans earn 64 cents on the dollar. Latinos earn 53cents on the dollar. Women makeup 51% of the U.S. population, but hold only 19% of the seats in the House and 21% of the seats in U.S. Senate. We rank—if you can comprehend this—100th, globally, for the percentage of women holding national government positions; we rank after Afghanistan, Iraq, and Pakistan. We rank 46th in the world in maternal mortality rates, behind Saudi Arabia, Libya, Kuwait, and Kazakhstan.”

He explained that worldwide, more girls and women die simply because of their gender in the 20th century than all the soldiers who died in all the wars in the 20th century. The Forbes’ list of 100 wealthiest Americans have a collective, aggregate wealth greater than the entire population of the 42 million African Americans in this country. Today, an estimated 32 million people in the world are living in human slavery, more than a million in the U.S.

Lapchick explained that this was the very reason he wanted to speak to the Alderson Broaddus community. He challenged all graduates to be “Battlers for life” and to crush defeat and take on challenges that so many people face in our society. Lapchick said, “I don’t have any doubt that if there were more women and people of color making decisions in our country, that all those social injustice issues I talked about would be addressed in a more systematic way and we can get toward a conclusion for that. I wanted to be here because I know the AB community is a community that cares and is going to make an enormous difference.”

Lapchick explained how he comes from the world of sport much like our graduates. Regardless of race, religion, economic background, or personal preferences, a team only wins if you all work together. “Keep that teamwork that you’ve learned here at this great University and use it for the rest of your life,” said Lapchick. “We’re going to have a safer, better world because of the people who are graduating from here.”

In addition to the commencement ceremonies, the AB School of Nursing welcomed 30 students to the profession during the symbolic Convocation and Pinning Ceremony that took place on Friday, May 3 in Wilcox Chapel.

Dr. Gina Maiocco, professor of nursing and a 1981 alumna of AB, spoke to the crowd about how actions matter. She challenged the nurses to always fight for what is right for their patients. “Lead, don’t just follow. Think forward, continue to grow, and remember that actions always matter,” said Dr. Maiocco.