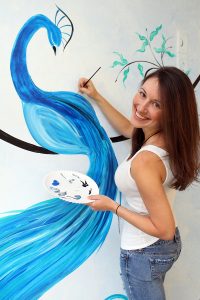 What’s So Special About Today?, Ollie and the Egg-Splosion, The Untold Story of the Three Little Pigs, Four Bears in a Box, and  Beasley & the Big Guy in Red, all have one thing in common, 2012 Alderson Broaddus University alumna and illustrator Ashley Belote.

As a part of the Battler community, Belote was a member of the track and cross country teams and served as team captain throughout her sophomore, junior, and senior years.
Her time between academic courses and sporting events was spent in the art studio, working on projects and honing her craft. During the summer of 2011, Belote designed and painted a four-story, 3,000 square-foot mural depicting scenes of evolution in the south stairwell of Kemper-Redd Science Center.

According to Belote, “The goal was to showcase the purpose of the building, teaching science. The mural reflects the various subject matter being taught on each floor of Kemper-Redd and depicts the biological progression of life. Science and the natural world are beautiful; the inspiration came from the world around us and how it came to be.”

Belote experienced a time of growth at AB and was afforded the opportunity to leave her mark in a big way. Asked about her experience at AB, Belote said, “I graduated with a sense of independence. College is meant to help you grow and become independent, and AB certainly helped me do that.”

Upon earning a bachelor’s degree in visual arts from Alderson Broaddus University, Belote went on to receive a master’s degree in arts administration at the University of Kentucky. She has illustrated more than 25 national award-winning children’s books and has a background in traditional animation under the direction of one of the chief animators for Disney to come to the mantle after Walt Disney’s passing, Don Bluth.

In addition to illustrating many award-winning children’s book projects for nearly a decade, families can look forward to seeing her work as the illustrator of the upcoming Frankenslime by Joy Keller. In this picture book, a girl scientist experiments to make bold and beautiful slimes and ends up creating a slime creature.

Belote’s new project is set for publication in the summer of 2021. She is working to broaden her artistic horizons as a writer of her own stories.