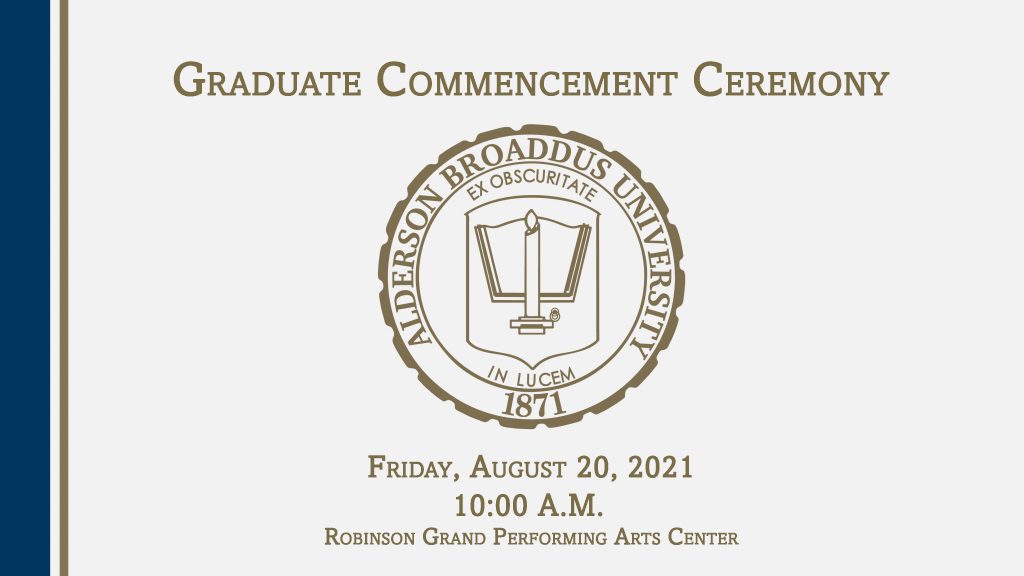 Congratulations! We commend you for your hard work and perseverance.

If you have questions about the successful completion of your academic requirements for graduation, or if you have concerns regarding your eligibility to participate in commencement exercises, please contact your academic advisor immediately.

As a member, we hope that you will stay connected with us. Let us know where you are so we can send you publications, notices of alumni events and activities, and keep your records up-to-date. Send a change of address to us whenever you move. Drop us a note if you get married, have a baby, get a new job, etc. Click here to complete the form.

Remember the Alumni Office staff is here to serve you. If you have questions, comments, or simply want to inform us of changes or happenings in your life, please call or write anytime.

Must I wear regalia at the graduation ceremony?

Yes. Academic regalia is required for participation in the AB Commencement. We want Commencement to be the truly impressive occasion it should be.

Where can I order regalia?

Official AB regalia are available through the AB Bookstore location.

Please contact Ed Burda in the bookstore, by phone at 304.457.6238 or by e-mail burdaep@ab.edu. Please note that AB graduates wear a customized blue gown with an AB logo. The purchase price of the cap, hood, and gown is included in your graduation fee.

When will regalia be available for pick up?

What is academic regalia?

A cap (also knows as a mortarboard) is an essential part of an academic costume and should be worn with the gown at all times. Men should remove their caps during the singing of the national anthem or alma mater and during prayers. At other times, follow the President of the University. The cap should be worn straight on the head, pulled well down over the forehead. Tassels should be worn over the left edge of the mortarboard for all persons except graduating seniors. They should wear tassels over the right edge until after the appropriate point late in the ceremony. Degree hoods should be checked to be sure they hang properly.

Graduates are permitted to wear honor or organizational cords, pins, or stoles in conjunction with the graduation gown; however, please be mindful of the solemnity of the Commencement ceremony and limit the adornments to one item only, selected by the graduate (e.g., stoles which represent the graduates country of origin [international students].

Directions to Venues and Campus Map:

Lodging in and around Philippi will fill quickly during commencement season. We have compiled a list of local accommodations.

Will a recording of the ceremony be available online?

A recording of commencement ceremonies will be available within 72 hours on the Alderson Broaddus University official YouTube channel.

The Alderson Broaddus University Seal
The official seal bears the founding date, 1871, as well as a candle, which signifies the torch of learning an open book, the Bible, which signifies a source of knowledge and truth. The Latin words, Ex Obscuritate in Lucem is translated “out of darkness into light”.

The Mace
In the Middle Ages, the mace was used by knights as a weapon. However, since the 14th century, the mace has been used as a ceremonial symbol of authority. The mace used in the ceremony today is a piece carved from a single block of cherry wood by AB alumnus Mark Warner ’68. The mace carving includes the Latin wording and symbols from the official college seal. The case in which the mace will be displayed and stored was also made by Warner. It bears the inscription, “The fear of the Lord is the beginning of knowledge” (Proverbs 1:7).

Marshals and Mace Bearer
The tradition of academic marshals comes from storied English universities. The Marshals are the chief protocol officers who coordinate the ceremonial traditions of commencement, including the processional and recessional. Marshals are typically members of the faculty. Student marshals help facilitate graduate processions and recessions during ceremonies. The Mace Bearer is responsible for the school’s mace and leading the ceremonial marches.

Recipients are not necessarily graduates of the awarding institution; rather, the school often views the degree as an opportunity to establish ties with a prominent person. At some schools, honorary degree recipients deliver the commencement and/or baccalaureate address, but this is not a requirement. Honorary degree recipients are selected through a nomination process established by a school’s governing body, and its own trustees.

Because honorary degrees are so prestigious, it is imperative to award them with solemnity. Honorary degrees are often presented at commencement to take advantage of the pomp and circumstance already in place and to accommodate the largest possible audience.

Processional
Graduates will march single file in procession; all others will march double file. Please keep about two yards (never less than an arm’s length) from the person in front of you. This may even necessitate coming to a halt when the procession slows while the people ahead of you are being seated.

Academic Regalia
The academic gown, as used in America, is really a uniform. On its historic and picturesque side, it serves to remind those who don it of the continuity and dignity of learning and recalls the honored roll of English-speaking university men. On its democratic side, it subdues the differences in dress arising from the differences in taste, fashion, manners and wealth, and clothes all with the outward grace of equal fellowship which has ever been claimed as an inner fact in the republic of learning.

Hoods
Hoods are the most expressive component of the academic costume. With modest beginnings as head-warming cowls on medieval monks’ cloaks, hoods today communicate the owner’s school, degree, and field of study through their length and the colors of the lining and binding.

Actually, today’s hoods are not really hoods at all. Instead, they have evolved from a serviceable article of clothing to a type of elongated scarf draped over the shoulders and displayed down the back with the lining turned inside out.

Hoods are lined with the official school color or colors, hood linings indicate where the wearers earned their degrees. Almost always, these are the schools’ athletic colors. Hood linings are typically made of silk or equivalent synthetic fiber.

Binding, also called edging, trim, or borders, is the term for the velvet or velveteen sewn around the edge of the hood. The color indicates the wearer’s field of study; for master’s degrees, three inches, for specialist’s degrees, four inches, and for doctorate, five inches

Presidential Regalia
Based on the design of the traditional doctoral gown, presidential regalia are of the finest quality fabric and styling. Presidents are the only academics entitled to wear a fourth velvet sleeve chevron. Presidential regalia are retained by the school and worn only while the president is in office. The president’s costume is completed by either a doctor’s tam and gold tassel or a mortarboard with a long or short gold or black tassel.

Trustee Regalia
Regardless of their earned degrees, members of a school’s governing body are entitled to wear doctoral gowns trimmed in black velvet. Members of a school’s governing body wear hoods either of their own earned degrees or those “especially prescribed for them by the institution.” Such hoods are not indicative of any degree, but instead, are custom-designed to complement the gown. Trustee hoods are four feet long, or doctor’s length. Headgear can range from the popular choice of a velvet tam with a short gold tassel or mortarboard with thread tassels.

Mortarboards and Tams
No one knows for certain how mortarboards came to be part of the academic costume, but there are several plausible theories. Where the actual mortarboard shape came from is subject to speculation. Regardless of how the tradition started, illustrations from Oxford in 1674 show a scholar wearing a mortarboard little different from ours today. The mortarboard is worn by all degrees. They should be black and covered with the same fabric as the gown. The hat is properly worn flat on the head with the pointed undercap pulled onto the wearer’s forehead. It should be parallel to the ground, not cocked back on the head so that the tassel can fall straight down the side of the wearer’s face. The academic costume is not complete and correct without the mortarboard.

In recent years, however, soft velvet tams with four, six, or eight corners have become popular, superseding the mortarboard as the headgear of choice for doctorates. Black mortarboards, however, are still correct for doctorates to wear. The tam is properly placed flat on the wearer’s head. It should not be pulled too far forward onto the forehead like a beret, nor should it cling precariously to the back of the head. The preferred color is black, although some schools’ special regalia include colored tams for doctors.

Mortarboards and tams are worn throughout the academic procession and conferral of degrees. Men should remove their hats as a sign of respect during the national anthem, prayer, and alma mater. Other appropriate but optional times are during the commencement address and baccalaureate sermon. Women are not required to remove headgear at any time. Traditionally, removal is done in unison and orchestrated by a verbal signal from the podium.

Honorary Degree Recipient Regalia
Honorary degree candidates wear a black doctor’s gown with black-velvet facings and sleeve chevrons and a tam with gold tassel, or a mortarboard with either gold- or black-thread tassel. He or she is hooded with the school’s doctors’ hood trimmed in the appropriate faculty color.